Joni Hamlett returns to Embrace after working with the team for nine years, taking a year off to work with Loan Depot, and previously working for 30 years prior to that as a Sales Manager, Sr. Loan Officer, and Branch Manager at Wachovia Bank. With her decades of experience in the mortgage industry, she’s adept at guiding clients through the process of realizing their dreams of homeownership.

Joni has been a President’s Club Member for eight consecutive years, ranked in the top 100 mortgage lenders in the nation for USDA loan originations, and was an esteemed member of the Million Dollar Club at Wachovia Bank for 15 consecutive years. Joni is also President of Commonwealth Business Associates, a Board Member of Lynchburg Affiliates Group of Lynchburg Associates of REALTORS®, and a Member of the Central VA Business Coalition. She looks forward to finding the perfect loans for the Cornerstone, Wyndhurst, Trent’s Landing, and Farmington neighborhoods and surrounding areas.

Joni currently lives in Lynchburg, Virginia, but grew up – well, all over. As the daughter of a father in the Air Force, she had the opportunity to see different areas of the United States and England, which also opened doors to travel throughout Europe. She attended Virginia Tech and Virginia Commonwealth University, and is a graduate of the American Institute of Banking. Joni’s family consists of her loving husband Steve, who she’s been married to for 39 years, as well as their two sons and a grandson, as well as a dog named Bo, their beloved fur baby. In her free time, she loves to read and watch her grandson play sports. And her idea of the perfect day would be spending quality time with her family and friends. 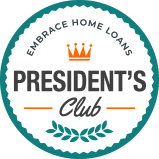 Joni Hamlett, NMLS # 234278, is employed by Embrace Home Loans and is licensed in: VA

Managing Homebuyer Expectations and Disappointment in a Competitive Housing Market

We all know it’s a hot housing market out there — at least those of us well-versed in this industry. Your average homebuyer, though? They’re less in tune. While they may be aware that home prices or rising or maybe even that bidding wars are the norm, they probably don’t have a full handle on…